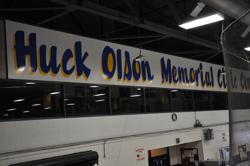 The Huck Olson Memorial Civic Center located at 525 Brooks Ave in Thief River Falls was constructed in 1969-1970 and provided an excellent hockey experience, as well as room for a number of various events in Thief River Falls.  With a seating capacity of 3,450 spectators, the Huck Olson Arena accommodates numerous high school hockey games and tournaments as well as other events such as Rodeos, and even Circuses.  The Arena was dedicated on Thursday February 12, 1970 in a match-up between the Warroad Lakers and the U.S. National Team that was won by the Nationals 5-2.  The crowd began arriving early for the game and the arena was filled to capacity by 7:00 p.m., although the dedication ceremonies started at 7:30 p.m.  At the time, it was the largest crowd to ever watch a hockey game in Thief River.  The Arena, previously called the Thief River Falls Sports Arena, served as the home rink for the Prowlers storied hockey team from 1970-2002, until the adjacently built Ralph Engelstad Arena was erected following a generous $13.5 Million donation from the Engelstad family.  The two buildings are connected via a walkway and collectively provide Thief River Falls with over 140,000 square ft. for multi-sport activities, shows, events, concerts, etc.

Ralph Engelstad headed the effort to name the old Thief River Sports Arena after Mr. Huck Olson, and Ralph was present when the dedication took place.  Huck Olson himself was a sports editor for the Thief River Falls Times for more than 30 years until his death in 1968 at age 62.  More to young people than a reporter of their athletic exploits, however, he gave much of his own resources to provide transportation and purchase items of sporting equipment to help those without the means to provide their own. Further, he refused to be critical in his stories or "Keeping Score" column of the mistakes made by young people while participating in high school and other amateur athletics. Never married and having no family responsibilities, Huck devoted most of his life to the local sports scene and those who were a part of it.  An athlete himself until he lost a lung punctured in a football mishap, he lived his sports interest in the lives of others.  While his name had been mentioned for some time as a possible name for the ice arena built in 1969-70, impetus for that naming came from members of the 1945 Prowler hockey team.  The group held a reunion at the state high school hockey tournament and agreed that they would like to have the arena named for Huck.  Ralph Engelstad followed through with that idea and offered to provide $20,000 to the city to cover costs of the name change, noting in his letter to the city council that Huck Olson "Did more to inspire the young athletes of Thief River than any one person and I believe that his name deserves recognition."

On March 10, 1992, the city council approved the naming of the arena as the Huck Olson Memorial Civic Center and it was dedicated on December 8, 1992.

Upon visiting Thief River, one can be taken back at the grandeur of the adjacent Engelstad Arena - but we highly encourage you to pay homage to the Huck Olson Arena, and visit the small "Thief River Hockey display" within the upstairs concourse within the building that features some priceless hockey artifacts donated to the city for display.

Special thanks to Mr. Dale Wennberg for the guided tour through the Huck Olson Memorial Civic Arena and Ralph Engelstad Arena, & for sharing your Thief River Falls hockey stories with us.